Discover our amazing Demo videoslots for free and play online the ones you like the best for real money !
Learn about the top developers and the best video slots for free or for real money.
Register now & receive free bonuses ! Win free spins & big jackpots! Play free unique slot games.
100% safe and reliable! join now, claim your free bonus and become a big winner !

Microgaming tempts you to step into the dark universe of silent assassins and sinister spies, helping the notorious Agent 47 hunt down some killer wins by playing the thrilling and highly rewarding Hitman slot machine. This slot machine is dead on target with its assassin theme based on the hit video game and film series, Hitman. As such, spinners are presented with a game that is slick and smooth with some deadly game symbols. There are silver pistols, a sniper rifle, a vial of arsenic with a syringe, a blade and a skipping rope; we highly doubt that this isn't for playground frivolities.

Play Here for Fun or For Real
@ SlotsMillion Casino! 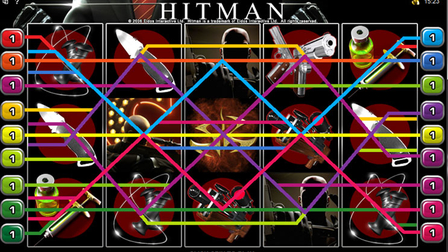 Get your hands on a cut of the payment with three thrilling bonus rounds. The first of these, which is triggered when three “Bonus” laptops appear on the third, fourth and fifth reels of the slot. This will start a mission in which players have to choose a single target from the ICA followed by their weapon of choice, with each selecting revealing a different bonus value, with a potential jackpot on offer worth 270,000 coins.
Players can get their hands on a somewhat smaller prize of 6,000 coins with the “Insignia” bonus. This is triggered by three insignia icons on reels 1, 2 and 3. Players will be able to choose one of the three symbols to reveal a special multiplier.
The free spins bonus is activated when spinners come across three or more scattered 18 certificate symbols and, fittingly, it will award 18 free games. 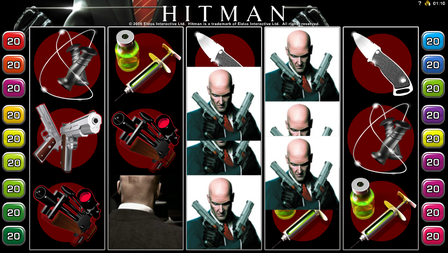 Expand Wilds  Agent 47 with the two guns is wild when it appears on reels 2, 3 or 4 and expands to cover the whole reel. This happens often enough to help you budget your cash accordingly. 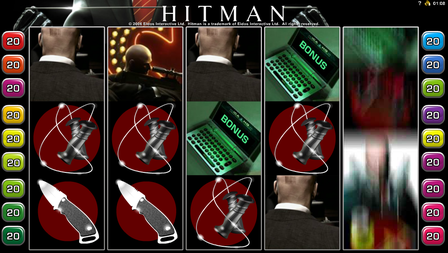 Contract Bonus  You need 3 Bonus laptop symbols anywhere on reels three, four or five, Choose between a line-up of suspicious-looking characters, and select a weapon, then a multiplier will be rewarded. 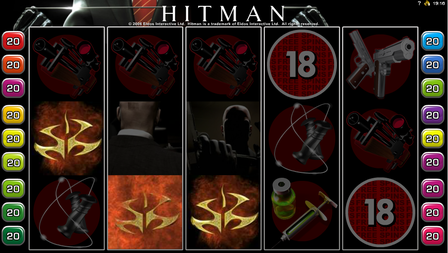 Insignia Bonus  Another simple click me feature, this one, on the other hand, appears often and usually gives you about 8x to 10x your bet. It has, sometimes, gone as far up as 15x for us, but not often. Three Hitman slot insignia anywhere on the reels will prompt you to pick one for a mystery bonus prize. 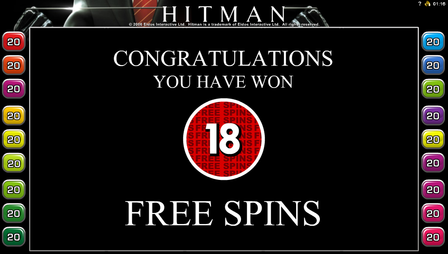 Free Spins  You'll need three 18+ cinema certificate on the reels to trigger 18 free spins with a 2x multipliers. Generous amount of free spins, though we would have liked a slightly higher multiplier. Still, you can have some decent wins if you get lucky.


You can Play HITMAN Here